What an incredible experience!

Life is either a daring adventure or nothing at all.

Mount Kilimanjaro in Tanzania is the highest mountain in Africa and the tallest free-standing mountain in the world: 19,340 feet (5,895 meters.)

According to National Geographic, “Kilimanjaro is made up of three cones: Kibo, Mawenzi, and Shira. Kibo is the summit of the mountain and the tallest of the three volcanic formations. While Mawenzi and Shira are extinct, Kibo is dormant and could possibly erupt again…The highest point on Kibo’s crater rim is called Uhuru, the Swahili word for “freedom.” The mountain is also known for its snow-capped peak; however, scientists warn that the snow might disappear within the next 20 years or so.” 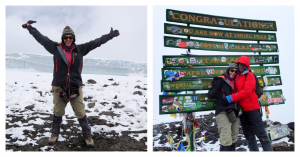 Pictured with Glory, one of the few women Kilimanjaro Guides.

What a great way to celebrate my 50th! It was fascinating to climb through five distinct ecological climate zones – all the way from tropical rainforest to arctic. Our trek group was on the mountain for an incredible 9 days/8 nights, approaching from the Shira Plateau in the West.

I recommend arriving a few days early to recover from your journey and taking one of the longer routes to give your body time to adjust to the elevation and increase your odds of summiting. Each year around 25,000 people attempt to climb Kili and less than half make it to the summit.

If you’re mulling over a Kilimanjaro trek, it’s not an experience to be undertaken lightly. Approximately 1,000 people are evacuated from the mountain annually, and approximately 10 deaths are reported. The actual number of deaths (mainly altitude sickness) is believed to be two to three times higher.

Undertaken thoughtfully and responsibly though, it’s truly the adventure of a lifetime. No words can describe the feeling of accomplishment and sheer awe of standing among the precious remaining glaciers on the roof of Africa…

I’ve found an adventure mindset enables us to embrace uncertainty and overcome fear to conquer summits in our lives.

What adventure is calling to you?

Kilimanjaro is a pretty tricky climb you know, most of its up until you reach the very top, and then it tends to slope away rather sharply. ~ Monty Python

What can I do to help you?

Life’s too short and precious to be anything but the most you you can be.

Chemistry matters (even though I was awful at in school!)
Want to hear more/see if we click?
Book a complimentary 30-minute consultation:

Let’s be in touch

Be in the know.

✨ Somewhere, something incredible is waiting to

🌿 Life, now, was unfolding before me, constantl

❣️ A thimbleful of red is redder than a bucket